When delivering an order to a customer she wanted to show me some old souvenir necklaces  from the 1970s. "Listen, the clasp is a wreck and I can't operate it anymore with my stiffening fingers, could you replace the clasp?" 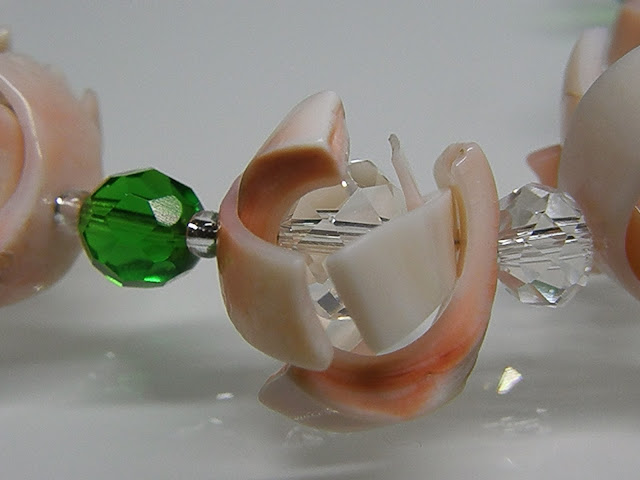 Since it is not my ideology to just reproduce the piece, I suggested to refresh the necklace with some new sparkling beads. She agreed with my idea. This is what I then did to a couple of her southern souvenirs and when returning them ready, she suddenly asked, what I could do with the extra pieces that were now left over.
The lady had some ideas. She wanted these left-overs to be placed in front and then gave me instructions on the other beads.

A couple of days passed and suddenly she called me again and said she had watched French TV and the anchor had had a marvellous necklace with bright green and red in it. She said she wanted these colors to be added to the necklace since it had looked so energetic on TV.

First it seemed like an odd color combination. The shell pieces were delicate and light, salmon like bits. The green and red such a powerful contrast. I was also worried that the shell would look cheap. This is why I had to spend time figuring out what would be the best way to arrange the focal point in front. 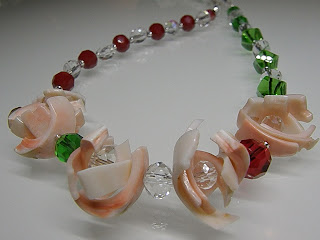 What an adventure it was to start beading these together. Little by little the shell shreds were turning into fragile rose buds and the screaming red was like blood drops on the vibrant green stem.

What first seemed like an extra job in between other orders now turned out to be one of the most inspiring processes for a long time. Not only the visual experience but the dialogue and meeting with the customer really made my day.

So, next time you are about to toss an old piece of jewelry, think twice. What if you gave it another chance for life! 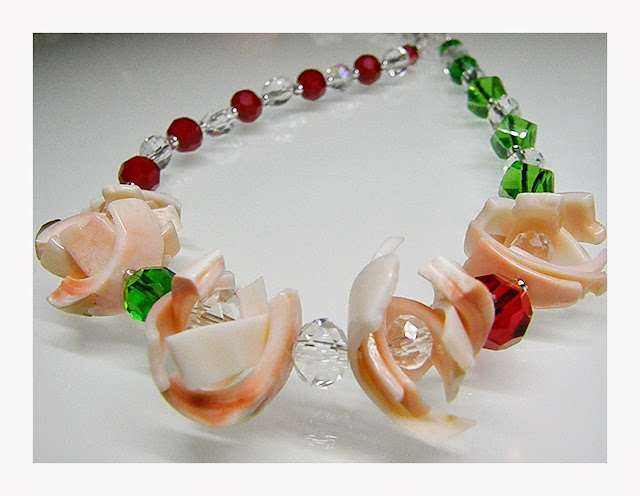 Posted by Lady Renaissance at 5:17 PM

Please let me know what you think! 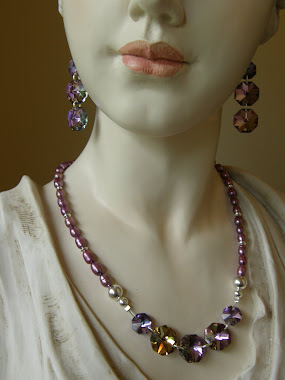 The Lucky Lady that gets to wear all my jewelry